Microsoft wanted to make a big splash with this event and they did a great job setting up for it.? The exclusive event this year was classy and catered well while maintaining an impressive tech room show-feel.? For those of you who were unable to attend the event or watch it live, check out some pictures below of how the studio was setup and how the show room was setup.

Microsoft also did a fabulous job of including the “history” to Windows 7.? They touched on what the motives are behind this new OS, how many engineers, testers and beta users they included and what feedback they took from the testers and how they changed their original product to conform to what the people wanted.? For those of you who’ve never seen a piece of software change shape before (…and boy do they change…) it will be an interesting experience to understand how rigorous and large of a processes the finalizing of a product takes!

Microsoft held the event this year at Skylight Studios and opened the doors at 10:00AM.? The Attendee and Registration line were already built up around 9:30 with many MVP’s, Media Head’s and Company Directors chatting it up about the excitement to see what Microsoft information will be released in just a couple hours!

The inside of the studio was beautiful with a wide variety of lighting to keep a lot of “Windows” colors over the artwork and walls. 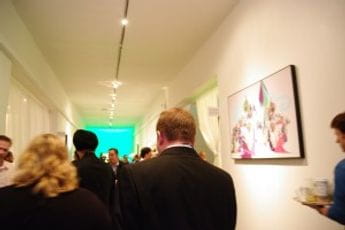 Different press and media members were walking around for interviews with Microsoft Employees as well as other MVP’s and attendees for pre-launch information about what they expect Windows 7 to become and how much of an impact it will make on the computing world.

Once we got into the main room, it was clear to see that Microsoft was ready to make a big impact and wanted to impress their members.? They came out with massive projector screens as well as sharp LCD monitors and TV’s to wow the audience.

With a surprise guest of Kylie (the lovable 4 year old who told the world that “she was a PC”) introduced Steve Ballmer who went right into the facts and numbers on what it took to create Windows 7.? Steve made sure he rewarded Kylie of her performance with a small pink netbook! 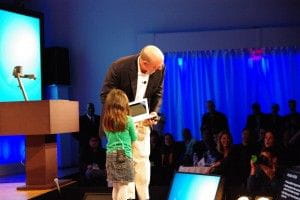 The shocking facts were that over 3,000 Engineers, 50,000 partners and 8 million customers (who provided the beta testing) were part in making the Windows 7 OS successful.? The shocking number of the 8 million testers can be placed against an astonishing fact that there are only 10 million OS X USERS world wide…so 80% of that number just TESTED the beta version of Windows 7.

Ballmer was quick to touch upon the response and feedback Microsoft received from its testers.? Each engineer would take the emotional and technical feedback they got for improving the software and posted it on a global wall where all employees could try and tackle the suggestions that were made. 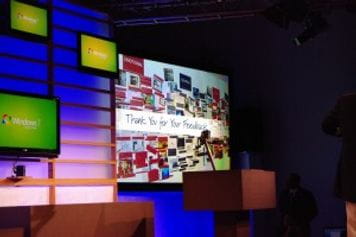 I think Microsoft did a great job out of the gates with the presentation.? Not only was I impressed at their techy feel at the event, I thought they did an even better job at first making sure they introduced this software as a “software of the people.”? Its always crucial to make the customers know they have been listened too, especially coming off a lower approval from Windows Vista.

For those of you who bought Windows 7 already, let us know what you think.? I’d love to hear your initial thoughts on the new OS.? Next week, I’ll touch more upon the features they described, what’s new and the new technology that is being designed and released for Windows 7!