Posted by Hemal in Windows

Windows 7 released a great deal of improvements in its OS, but one of the most noticeable differences and improvements is in the Multimedia and Entertainment system.? They put in a great deal of time and effort to include extra features, better aesthetically appearing menus and windows as well as “cool” applications you would never assume your PC to include.

Windows 7 boasts one of the most powerful and awesome new entertainment systems on the market today.? Check out some of these cool features that the new OS includes:

We all heard about the new multi-touch support for Windows 7 but its not until you see a Microsoft Executive slide his hand across an image of the ocean floor and watch the water move with simultaneous sound (or some scenario comparable to this) until you truly see how cool it is to be able have that ability.? Not only will you be able to “touch” your hardware supported PC’s but now you can do it to your TV’s!? The image above is actually a new TV monitor from HP that includes multi-touch support…check out where that touch feature is more useful then beach scenery… 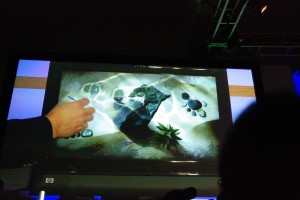 Not only will you be able to use it to browse through your personal video selection, Windows 7 now has partnerships with broadcast companies like CBS to include your favorite shows at your fingertips (ha what a great play on words with the multi-touch section)!? Not only will you have your regular sitcoms but who forgot about the Xbox feature that supports Netflix!

Netflix is no longer limited to the Xbox for instant download!? Use your PC to watch, stream, pause and play NetFlix movies with the touch interface to slide and browse your favorite comedys or chick flicks!? Stop play when leaving the house?? Not a problem, resume it from any location on any PC that has the supporting feature right from where you left off.

Microsoft now caters to those readers who might not always like to spend their time reading internet tech articles at What the Tech, with the inclusion of the Kindle.? Use the PC to save money on buying the hand held kindle hardware and grab your favorite pieces of literature instantly. 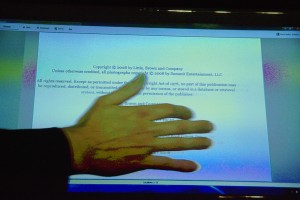 Ever plug in a camera and have to search for drivers, load on software or have to forfeit 20 minutes of your day just to download 2 pictures?? You can kiss those days goodbye!? Microsoft’s new peripheral support not only will display specific information about your device, but will also include those handy most used links right next to it to download pictures and make your peripherals fun again!

Not impressed yet?? This next one actually got an applause out of me…while I was still holding the camera:

All of those TV’s you see below, ranging from different sizes to connections, which have on different programs from Live TV to Recorded TV to Movies are all being powered by 1 Windows 7 Machine with only 52% CPU usage. The computer is just an average regular computer with no special parts or expensive hardware.? Impressed yet? 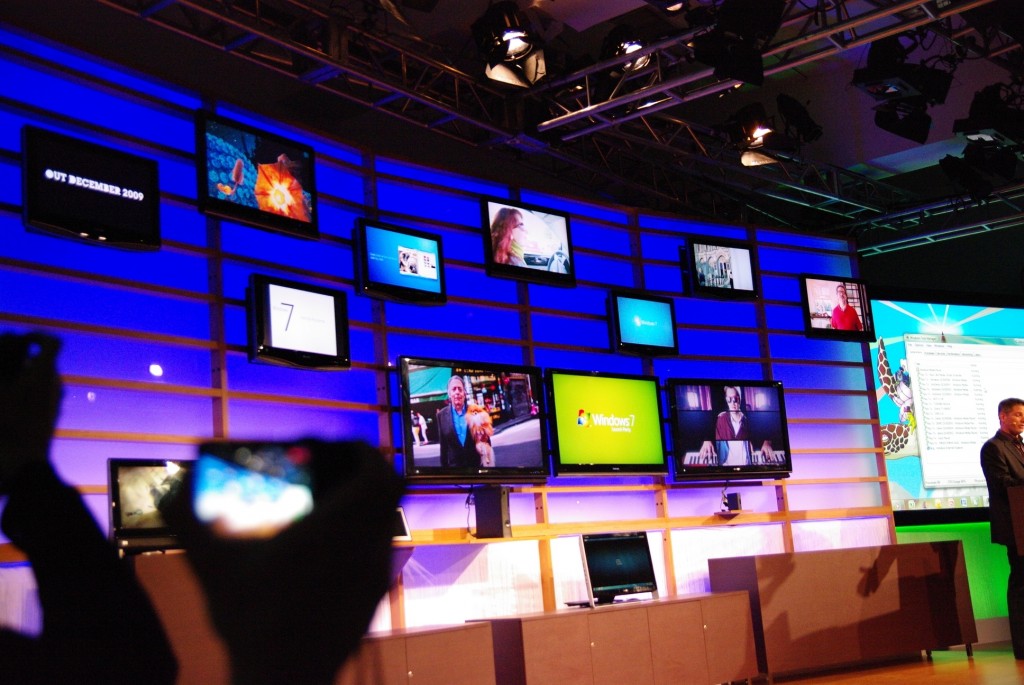 You can now connect all the devices in your home to integrate together such as the TV’s in the kitchen and theater, the receiver in the den, the speakers out on the patio just from your Windows 7 machine!? Anyone who likes having the ability to control the house without the use of expensive electrician work or those fancy remotes now has the means to a solution with Windows 7.