Back to the Mac Speculation

Posted by Hemal in Apple

Steve Jobs is at it again; another live Apple event is tomorrow at 1 pm EST / 10 AM PST.

There is tons of speculation on what will be announced at the live event tomorrow, but the theme of the event is “Back to the Mac.”

Before we go off and talk about a Verizon iPhone, I believe it’s important to look at the title of the event and assume its going to be more on their original computer line.

If I were to give my best opinion on what will be announced tomorrow, here are the possibilities:

1) A New Macbook Air– It’s been a while since we’ve seen anything new from this line so it’s almost a safe bet to assume some new hardware that might replace or improve this computer.? My complains with it almost contradict its design- its too easy to break and not enough ports.? While I’m fine with the fact that it does not come with a native DVD drive, it should have more USB ports and maybe a bit more muscle.

2) New Software Update- The main picture of this event has the picture of a lion behind the apple logo.? The latest update to their operating system, OS X, was 10.6.4 which was “Snow Leopard,” so a new animal from the jungle would only be fitting right? 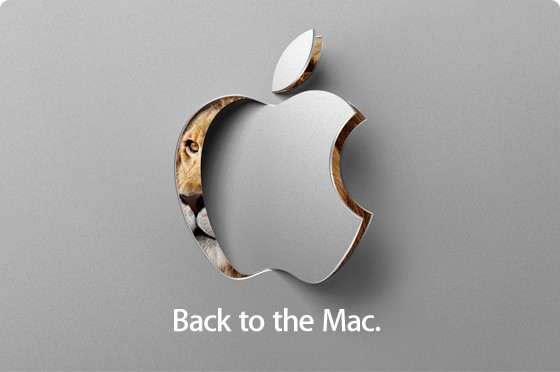 3) Hints at a new touchscreen– This is my shot in the dark type of speculation.? While they have the iPad, I’d like to see them come out with a touch screen computer or a computer that can do both inputs…take their Mac screens now (the computers that have all the parts built in and you just need the keyboard and mouse) and add a screen that allows users to multi-touch straight on the display!

Only time will tell so tune in tomorrow and find out what those secretive and lucrative people at Apple are up to!