Posted by Hemal in Hardware, Reviews 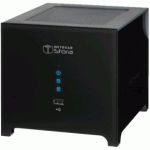 Ever want to share files across all the computers in your house but have no idea how to set that up between computers?

Been on the road and decide you want to watch a movie on your phone or pull some data off your home computer from your laptop?

Network Attached Storage (NAS) drives are becoming increasingly popular for their functionality in the workplace as well as at home.? They are a central way to share files, media and much more across the home network as they allow for data to be accessible in a secure manner outside your home.? Netgear was nice enough to send us a Stora to use and I’ve been pretty impressed by what it can do.

The product that Netgear sent us is the Stora equip with a 1 TB hard drive.? The Stora is a small cube at around 7 X 6 X 6 inches made of a metal under chassis with plastic coating around the walls.? It has a nice solid feel of any case with ventilation holes all around the cube.? The front of the cube has 3 notification LED’s- once blue for power and two green lights to display the state of each hard drive.? As we only had 1 hard drive in this case, it only displayed one green LED after the power indicator.? The Stora also has a USB 2.0 which can attach an additional external hard drive you might have lying around or a printer you wish to make network available.? I found that feature to be pretty nice as this is a great way to recycle an old external hard drive rather then letting it going to waste. It also provides the ability to attach a regular USB printer and make it something to share on the network for all computers to access. 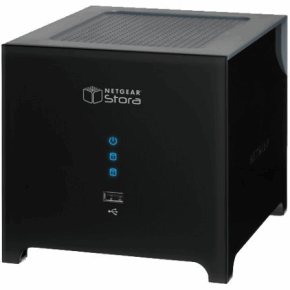 The Stora’s small size really plays in its favor as it can be tucked away in the corner of a desk or even sit next to the family router.? Netgear made this box virtually silent besides the sound of a working CPU or hard drive spinning, which makes it perfect or ideal for an office or even tucked away in a public living room!

The back of the Stora has two clips for opening the case to add a new hard drive as well as a reset button, power slot and a Gigabit Ethernet port.? To those who might not be as geeky as the rest of us, a Gigabit ethernet port allows for some of the fastest possible transfer speeds over the network to your computer! 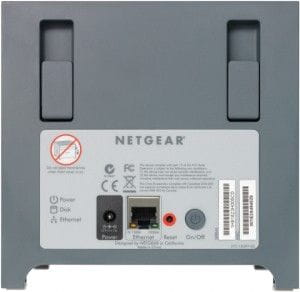 On the inside, the Stora has a 1 ghz processor with 128 mb of RAM and 256 mb of flash ram.? The Seagate Barracuda 7200 rpm drive which is ultra low power consumption.? This NAS drive draws only 9-11W of power idle (compare that to your 60-75W light bulb!) and its great to leave on all the time. I found the hardware to be fitting to all the streaming tasks and data transfer I had it preform.

My praise to the Stora is the easy to use interface and setup procedure.? This NAS box was easily designed for the non-technical user in mind as it asks fairly simple questions during the install.? The setup is a straight plug in play right out of the box apart from entering a desired user name and password combo.? The setup also includes a program install for Windows and Mac based machines to install local software to each computer with NO bloatware or annoying popups (another plus in our book).? Each Stora is accessible remotely through www.mystora.com with the same user credentials as before if outside your network.

The web browser has three simple buttons once logged in.? It allows the user to browse personal files, change preferences or even watch/listen to media files THROUGH the browser!? Enabling your Stora to be used on the network even imports libraries into all iTunes on any computer.? The Stora has a built in iTunes server so it shows up just like another library on your iTunes installed computers which is great for those who have music they would like to share to all the computers in their house.? As for the video aspect, I did have some trouble opening up different file formats (.avi and .wmv) and the speed to watch/buffer through the web based browser was slower than a local machine accessing the device, but it is very functional and would be great for those who travel and still would like access to their pictures, movies or music on the go.? (The login screen is even customizable to a picture of your choice!)

For local machines, the Stora can be mapped as a network drive with an icon on your desktop or My Computer (same for Mac users).? I find it very easy to use rather than an external hard drive as it is always on and easy to just open up through My Computer or Finder.? It looks as if it is another hard drive in your computer and avoids the clutter an external hard drive brings by having to plug it into the wall outlet and then hook up the USB cable to your computer and wait for it to detect…what a hassle!

The Stora is DLNA capable which means you can use it to store media files to stream wirelessly throughout your house.? The user has an option to either upload through a local machine that has the Stora mapped to it or just through uploading from the browser login.? I’ve been getting excited about more integration of streaming media throughout the house using DLNA and the Stora was detected by all of my media boxes with NO setup and streamed HD movies with no problems.

Users who use Facebook or other photo sites can even choose to upload their pictures straight to Facebook, Flickr any more.? Stora users do have the option to purchase additional login identities for this or even the ability to use mobile phones to sort through and use your Stora at $19.95/year.? Pretty cheeky from Netgear if you ask me after spending $200+ on a piece of hardware, but with or without that subscription, the NAS is very functional.? The lack of support for a good Android app was pretty shocking a well.? Currently the iPhone, WM phones and Blackberry devices are supported…but Android is growing faster than all of those combine; they NEED to develop an app for that quickly. It may be due to the fact that the Stora could be on its way out, but nonetheless an app should be around for the Android population.

Netgear did a great job of including built in backup software for Windows Machines or the ability for the Stora to integrate Apple’s Time Machine to back up Mac computers!? You can setup which time of the night to back up all the machines or just set up which times you would like the Stora to be on and when it should turn off at? night.? Great features to really save more on the power and go green.

Average write speeds were around 20-30 mb/s over the network with read speeds upward of 30-40 mb/s using the Gigabit ethernet.? Decently fast enough for me not to worry about using USB 2.0 external enclosures and right there in competition with some of the more external back up devices.

Bottom Line: Netgear made a great NAS box for the technically faint at heart and for those users who do not want to customize thousands of preferences or setup some complicated network device.? I love the build size, quality and power consumption.? The browser media player was a bit spotty when trying to play different types of codecs and plugins so I would pass on getting excited over that.? Another big bummer was the Stora only supports RAID 1 and not RAID 0 so you can never expand the amount of storage you have by combining two drives.? In the future, I would like to see a box that has support for both RAID 0 and 1 as well as the ability to support more types of hard drives (has some issues reported that it does not like certain manufacturers).

I like how it is very stable and reliable where I trust it to back up all the machines on my network (Windows and Mac) and has a very easy-to-use interface.? When looking for a NAS drive, I put more stock in having it be reliable, green to leave on all the time and have the ability to cross platform which is what this drive provides.? It’s quiet, efficient and won’t put a hole in a wallet.? While the paid subscription to unlock new features was a jab in the rib, I still give the Stora a thumbs up on build quality, functionality and ease of use.