How to Build a Cheap and Green PC

Posted by Hemal in Hardware 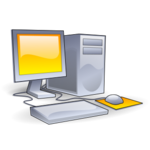 Years ago, the two biggest factors when building a new desktop computer are price and performance.? Today, there is a new added component to consider when putting together a machine, which is energy efficiency.

Modern computers must be powerful, cheap and equally importantly, they must be green!? Computers that use less power promote green initiatives within small to large corporations and also provide financial relief from costly power bills at the end of the month.? We went out in search of a good compromise of power and energy efficiency which led us to pursue the new AMD Fusion E-350 processor APU which supports faster performance than an Intel Atom chip while only consuming the same amount of juice.

Below is a break down of the parts we chose for our build, their price and what they give with respect to a performance:green ratio:

CPU/Mobo Combo:?? GIGABYTE GA-E350N-USB3 AMD E-350 APU ($129.99) -? The brain of any computer is the central processing unit (CPU).? The motherboard is the “body” that harbors this brain of the beast.? Its importance stems as the mold it gives for the rest of your build and availability for other parts you can use. 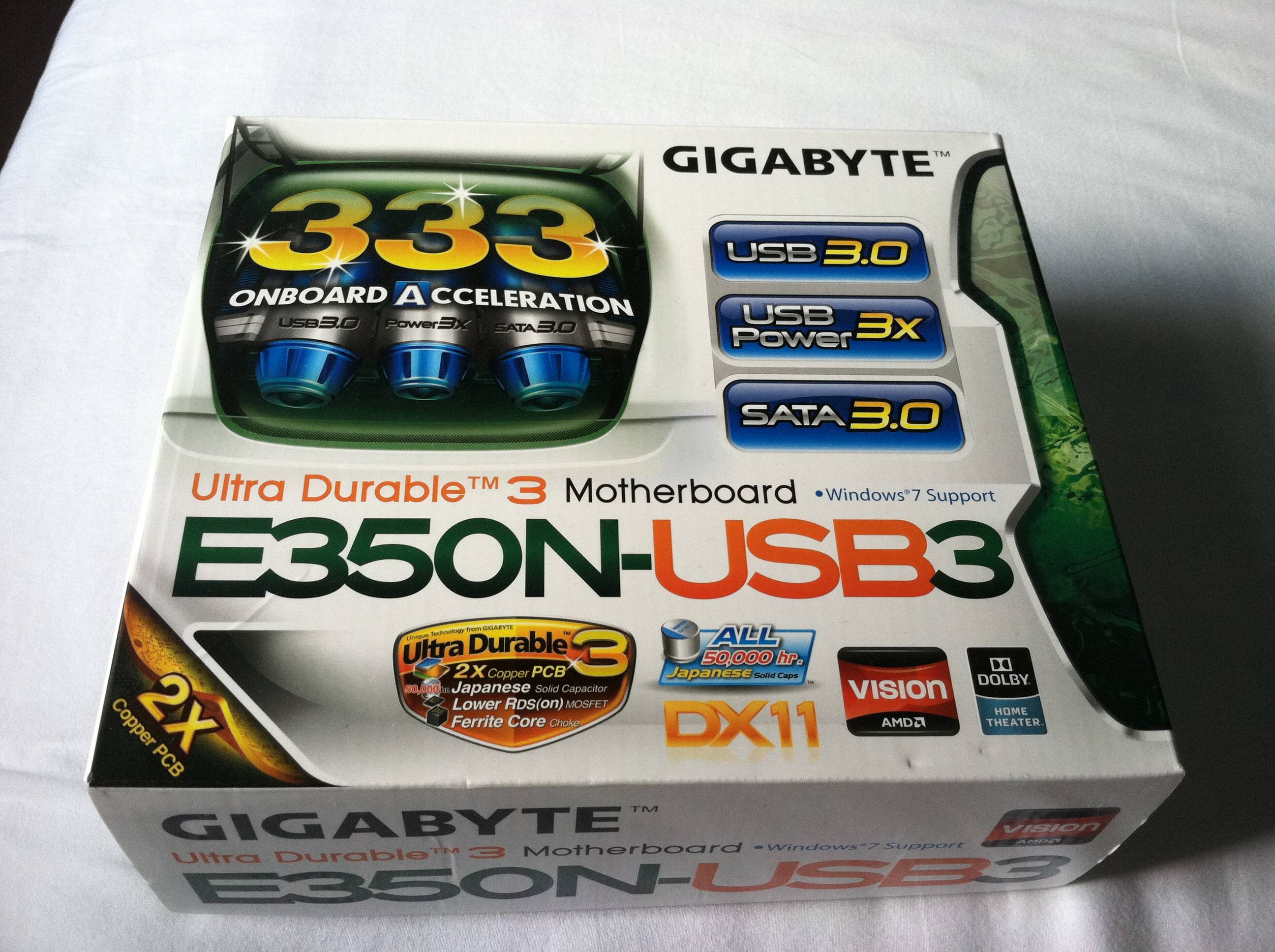 Our choice here was a board that supported the new AMD Fusion E-350 processor that features a dual core chip @1.6 GHz and is rated for power consumption at 18W. A Fusion chip combines the central processing unit with a graphical processing unit (computing and graphics processors in one) to streamline all available processing power in one single die. Not only does this allow for extra support on computing tasks, such as data computing, or graphical aid in 3D geometry rendering…it saves power and minimizes extra heat or space.

“The AMD Fusion APU (Accelerated Processing Unit)?allows you to?configure the small-form-factor, long-battery-life PCs that consumers crave, while enabling the powerful, next-generation visual experiences that can set you apart and help create a competitive advantage in a hyper-competitive market.”

We chose the AMD line over the Intel Atom for the reason that it is the next generation of combined CPU and GPU chips that work with each other more closely to support one another.? While the graphical component of this motherboard will not play the latest and greatest games on the highest setting, it performs quite well for the day to day or lower end graphical demanding applications with support for High Definition and 3D!

The board itself was a mini-ITX form factor (one of the smallest form factors for a computer) so it kept this computer physically at more compact size.? It gave us support for a fast hard drive, 6 GB/s SATA, and USB 3.0!

RAM: Wintec 4GB (2X2GB) Dual Channel DDR3 1333 ($25.99) – The pathway for information to move quick greatly relies on how much RAM you have.? Since we were planning on building a machine with 64 bit software, which utilizes the dual cores of the APU above, we needed to get at least 4 GB’s of RAM that is in dual channel mode.? For those of you who are not familiar with “dual channel,” imagine a highway with two lanes instead of one- this speeds up traffic and allows more “things” to get from one place to another in a shorter amount of time. 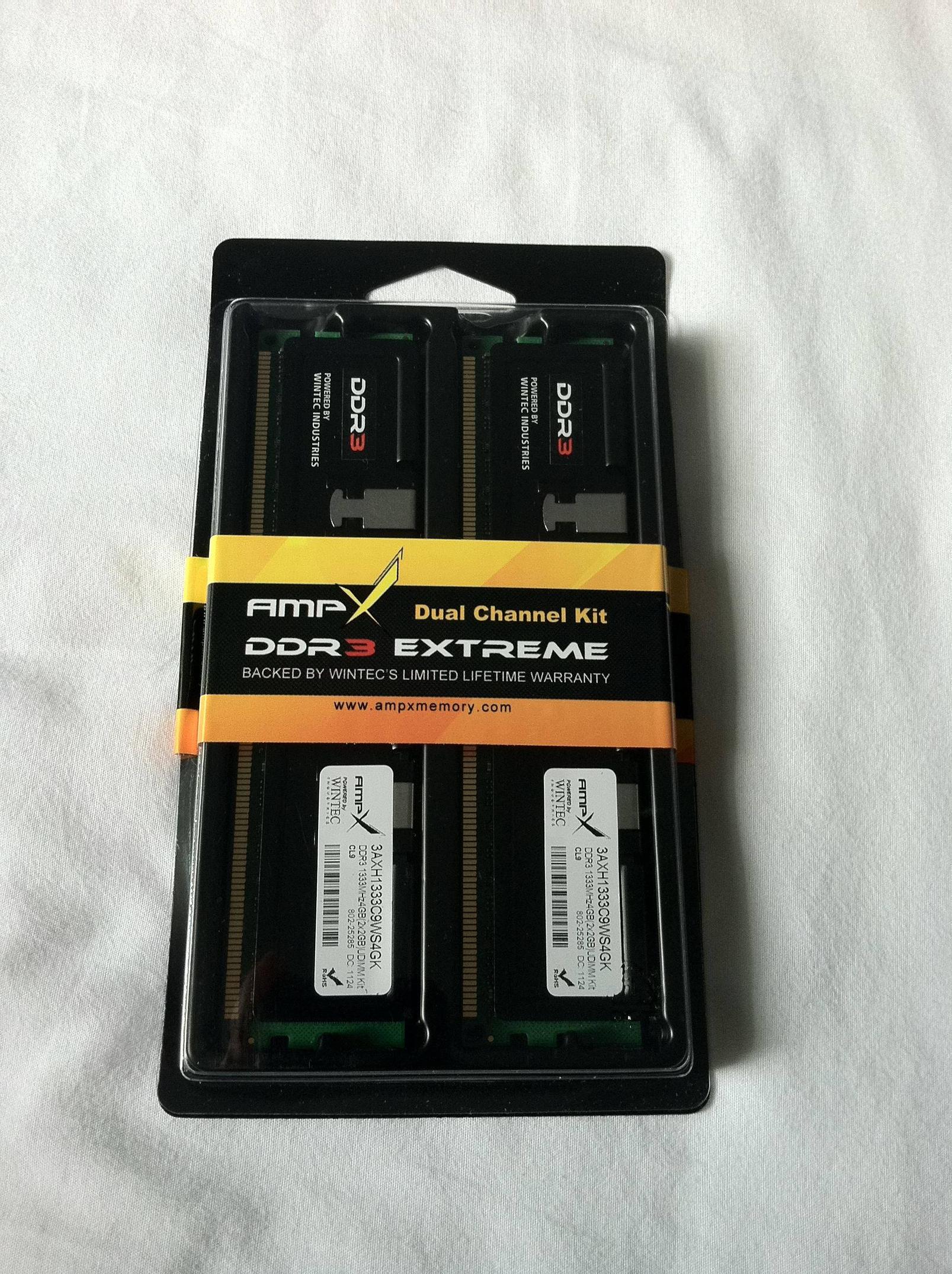 Hard drive: Samsung 1.5TB 5400RPM 32MB Cache ($49.99 after coupon) – Our hard drive here should be a nice large amount of storage for movies, music, photos and other documents.? I went with a 5400 RPM drive, which spins at a lower speed than a 7200 RPM drive, but also uses a little less power.? Either type is fine here, the importance is just the price as well as the cache size.? We have a 32 MB of cache here on the hard drive which is separate storage than the 1.5 terabytes where most of our information will be kept.? This smaller amount of memory is more easily accessible so it can recall data a bit quicker. 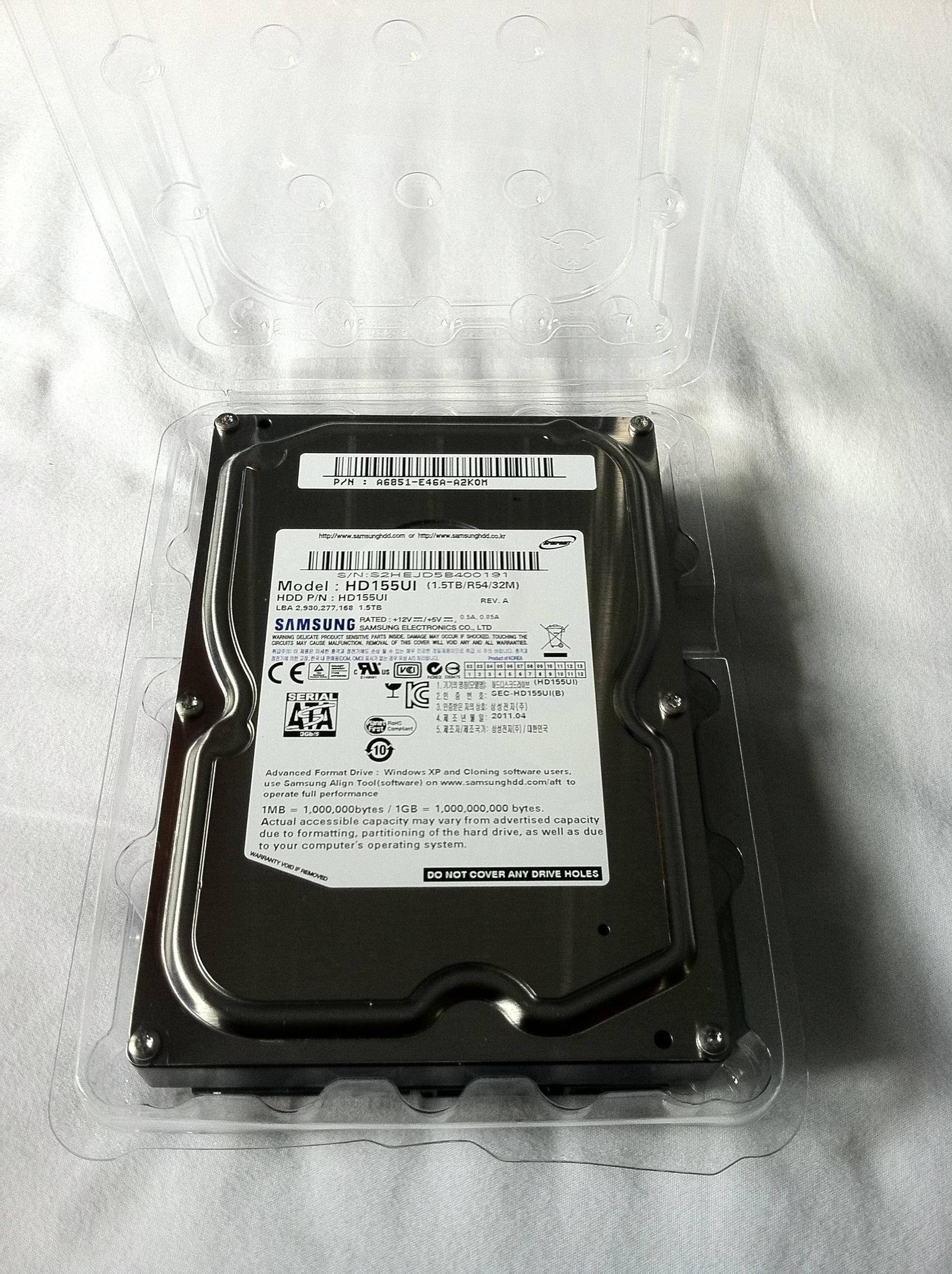 Case: APEX MI-100 Black/Mirror Mini-ITX 250W ($53.99) – Easy pick here for the case- something that supports a small Mini-ITX form factor and is bundled with a low wattage power supply that still has enough juice for our processor and other parts.? This case is overall very slim, sleek and can be hidden or kept in the corner of a desk or room. 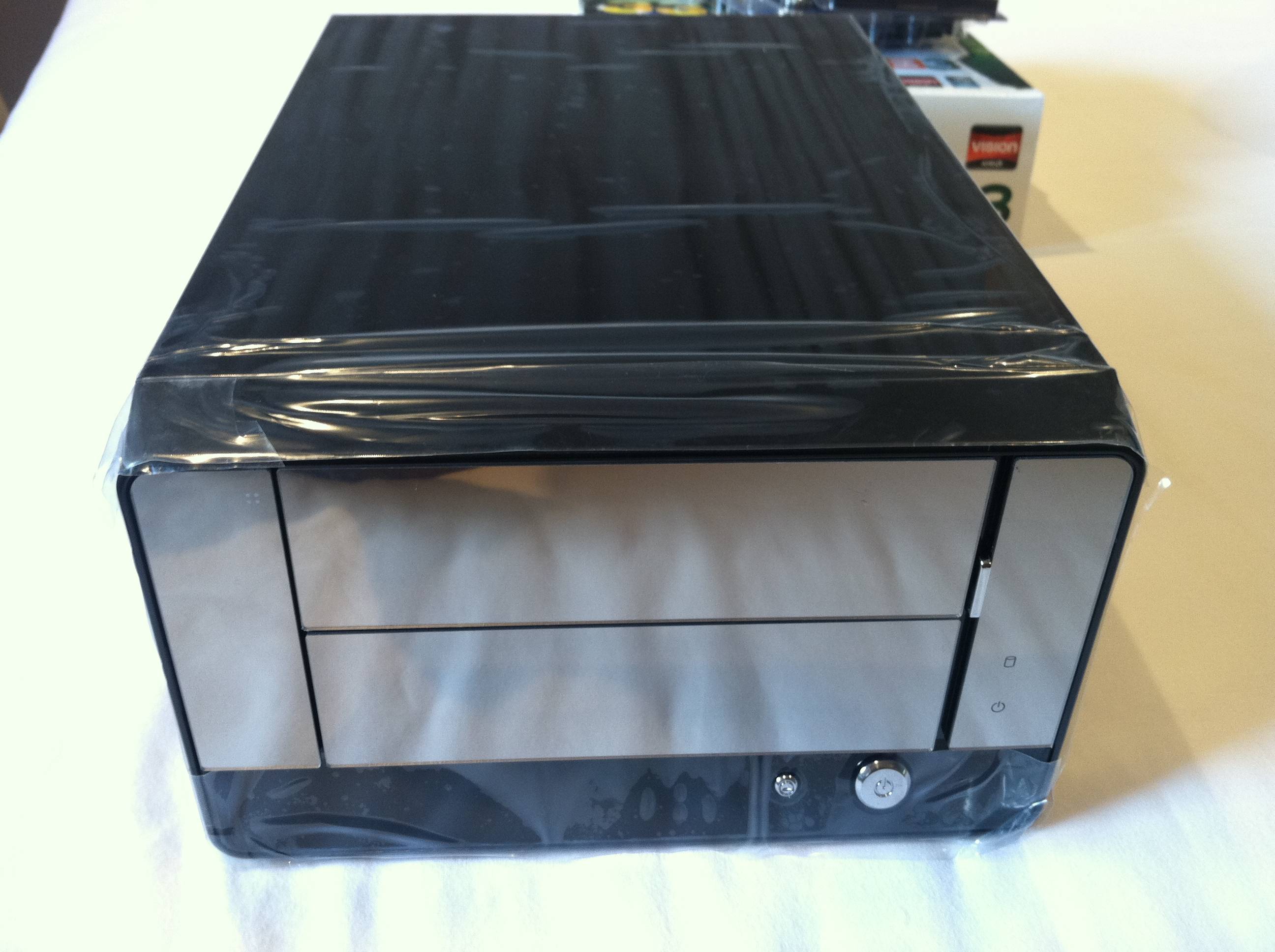 The first part of the build was preparing the case for the installation of the internal components above.? I started out by removing the top shell of the case (usually 4 screws on the back of the case) and then I removed the power supply unit from the top so I could work without any obstructions when installing the case (again 4 screws). 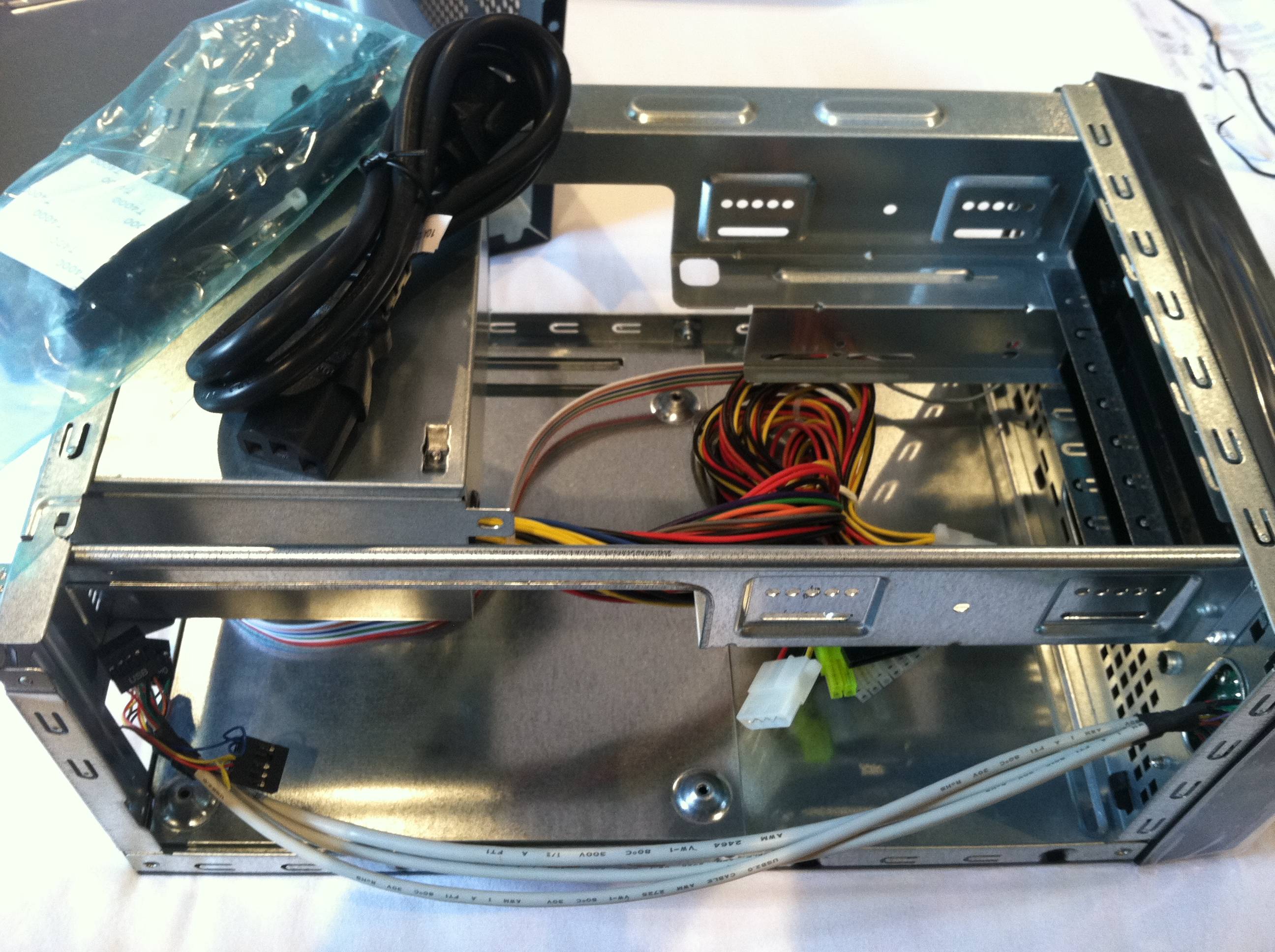 After the power supply was taken out and the cables were pushed to the side, I installed the back panel I/O and mounted the motherboard inside the computer with 4 screws.? Be careful when screwing the motherboard into the case, this is not a situation where you need to apply any force or keep the screws extra tight. 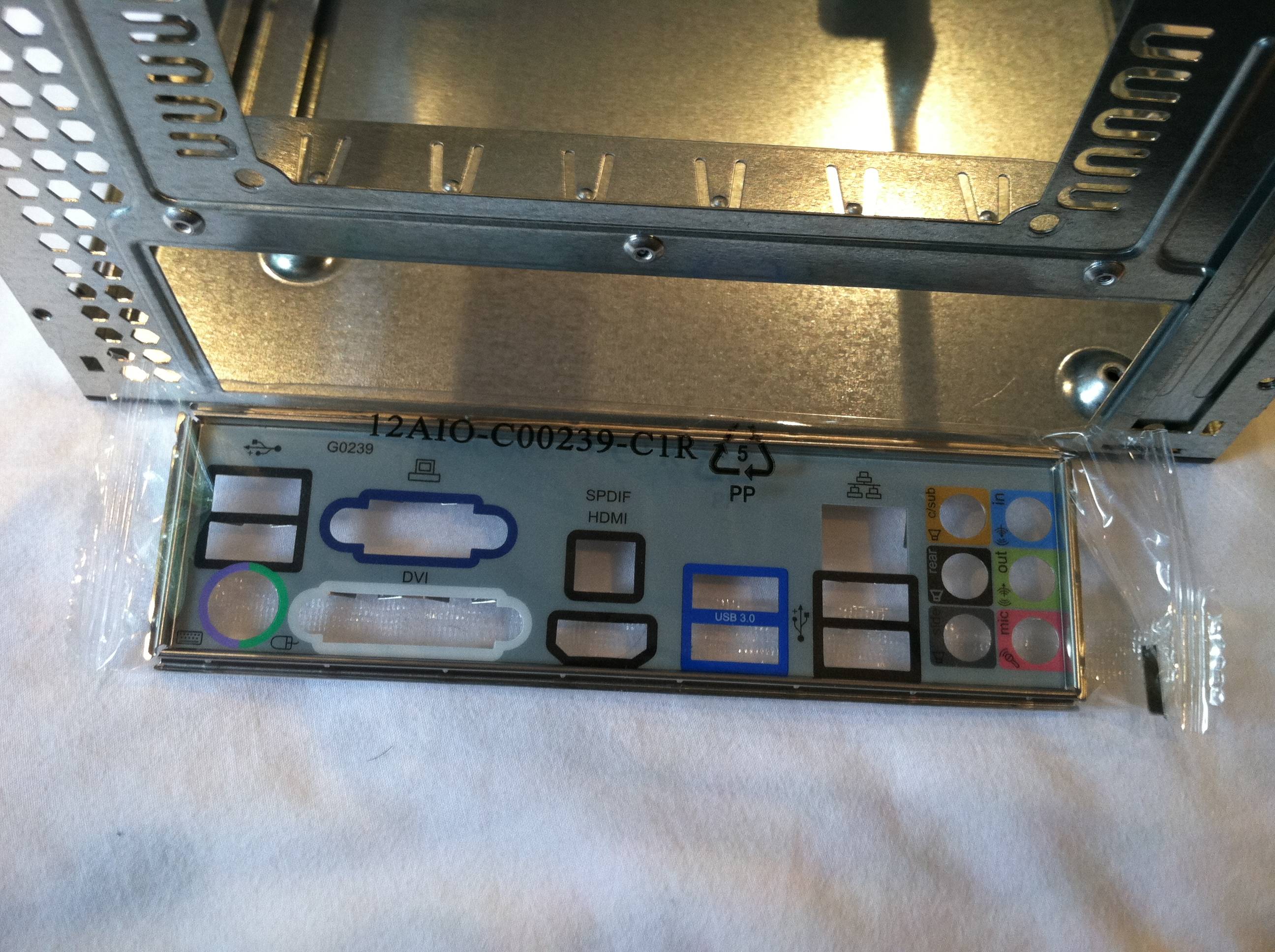 The motherboard will fit nice and snug against the back panel once it is put in place. 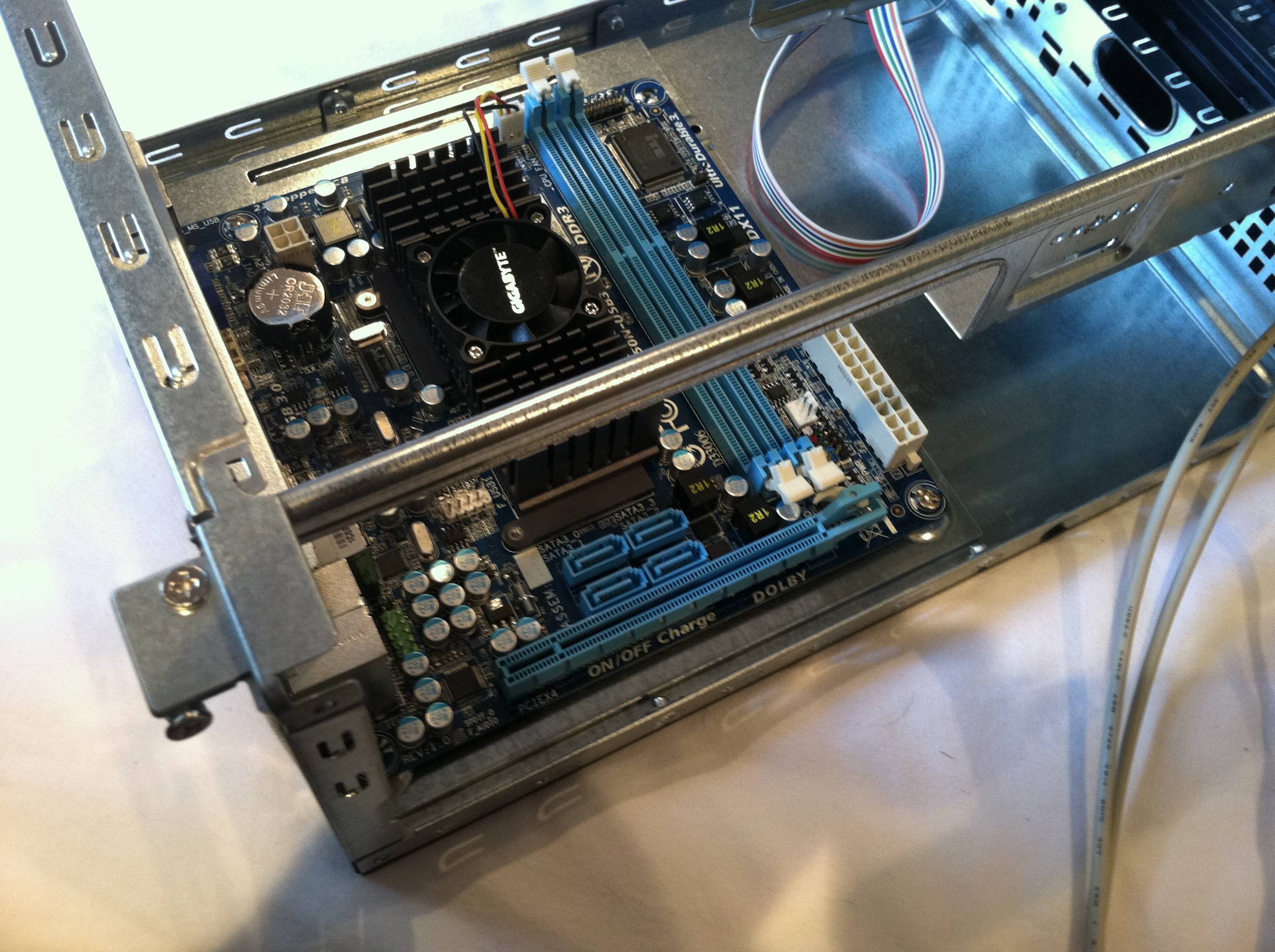 After the motherboard is sitting well, I can install the RAM and then plug in the cables that are coming from the case to the motherboard.? These cables are connections for things like the front USB slots, or the front audio jacks as well as just the LED’s/buttons that start the computer and show you that it is running or processing. 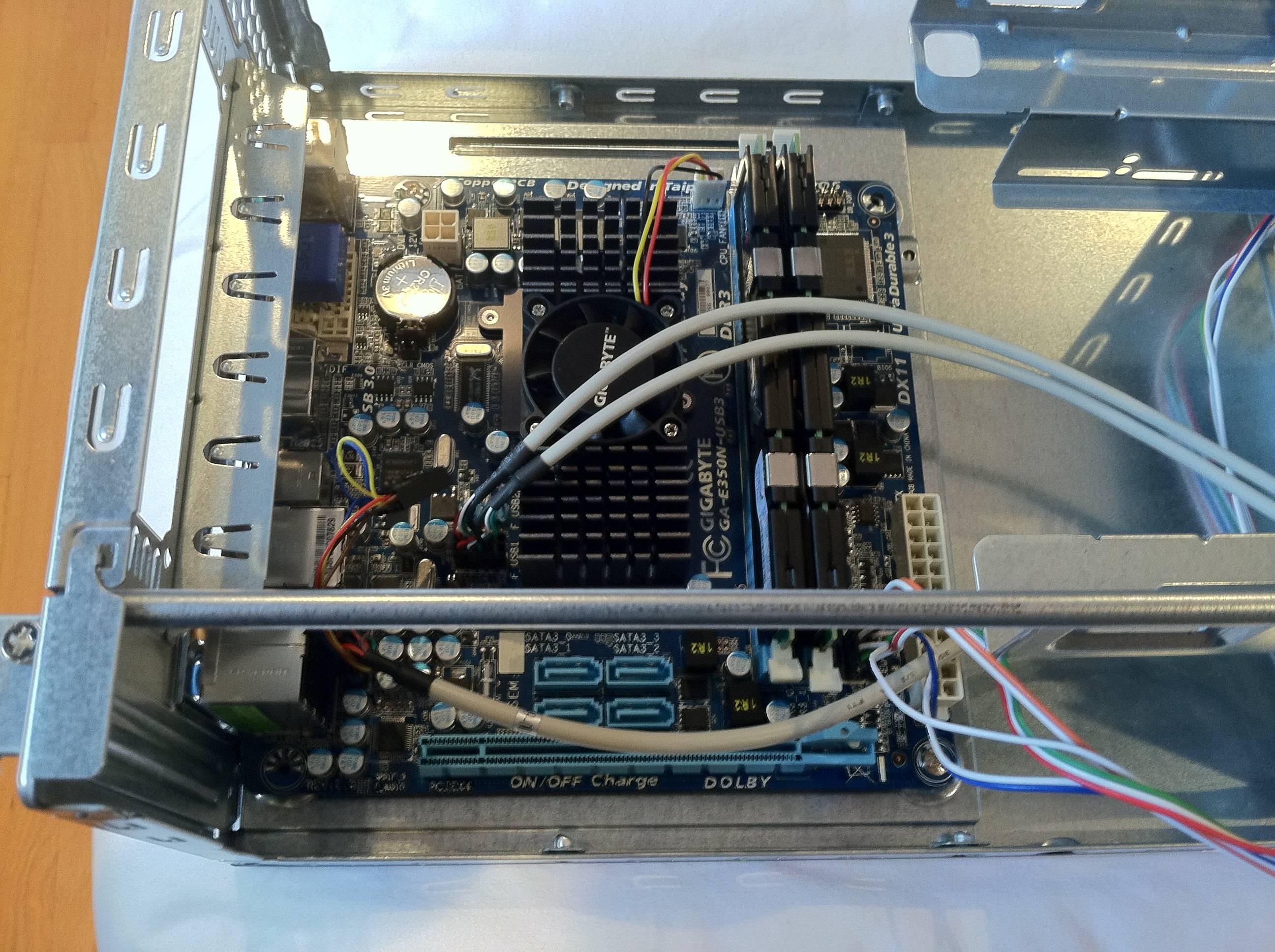 The next part we install is the hard drive.? This case has a special mount where the hard drive sits on the side to maximize space.? Be sure to connect the SATA cable to the motherboard and remember to plug in a power cable from the PSU when we mount it back on. 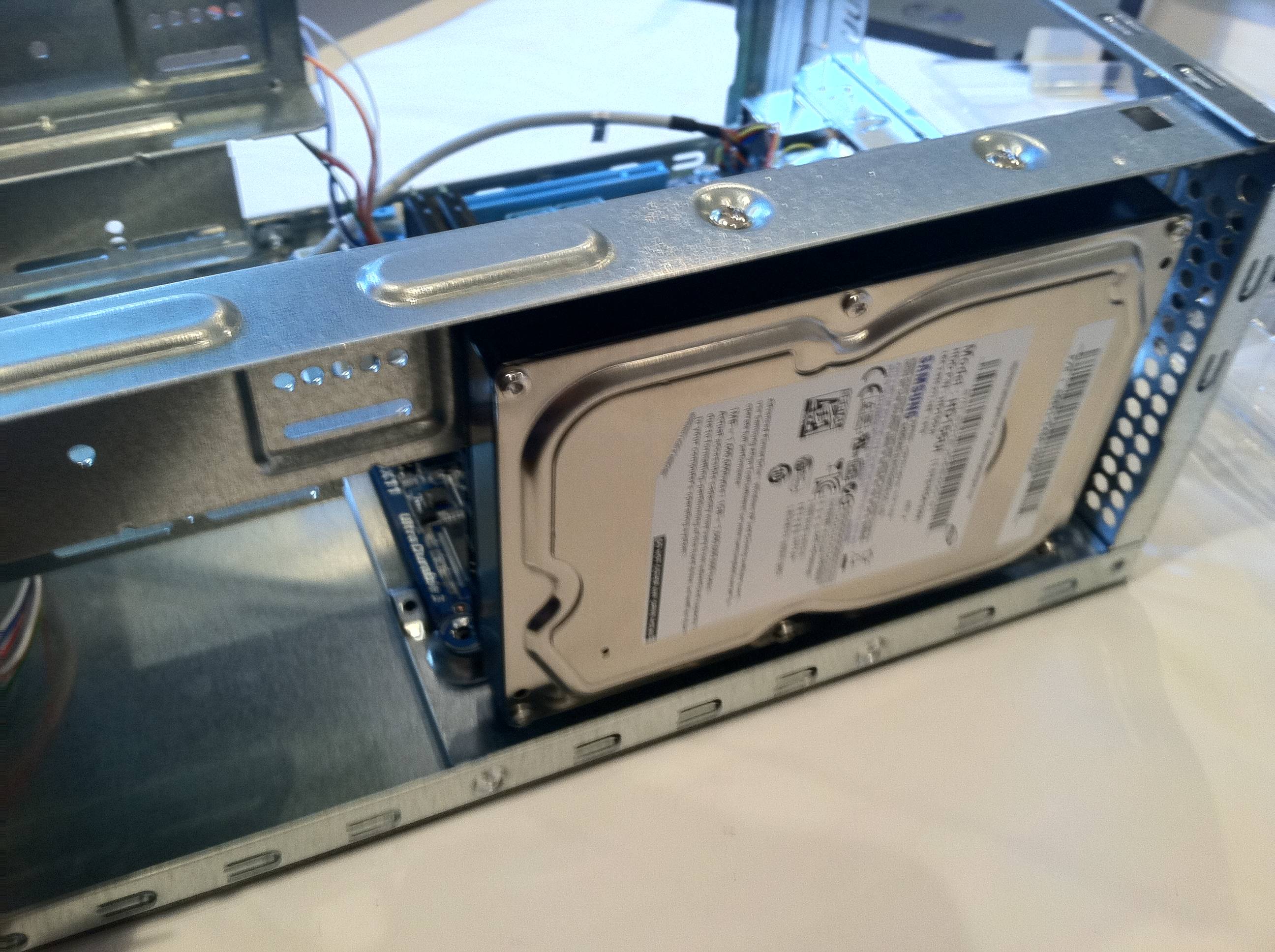 Put the power supply back in and plug in all the cables necessary to the motherboard (usually only 2-3 needed) and one into the hard drive. 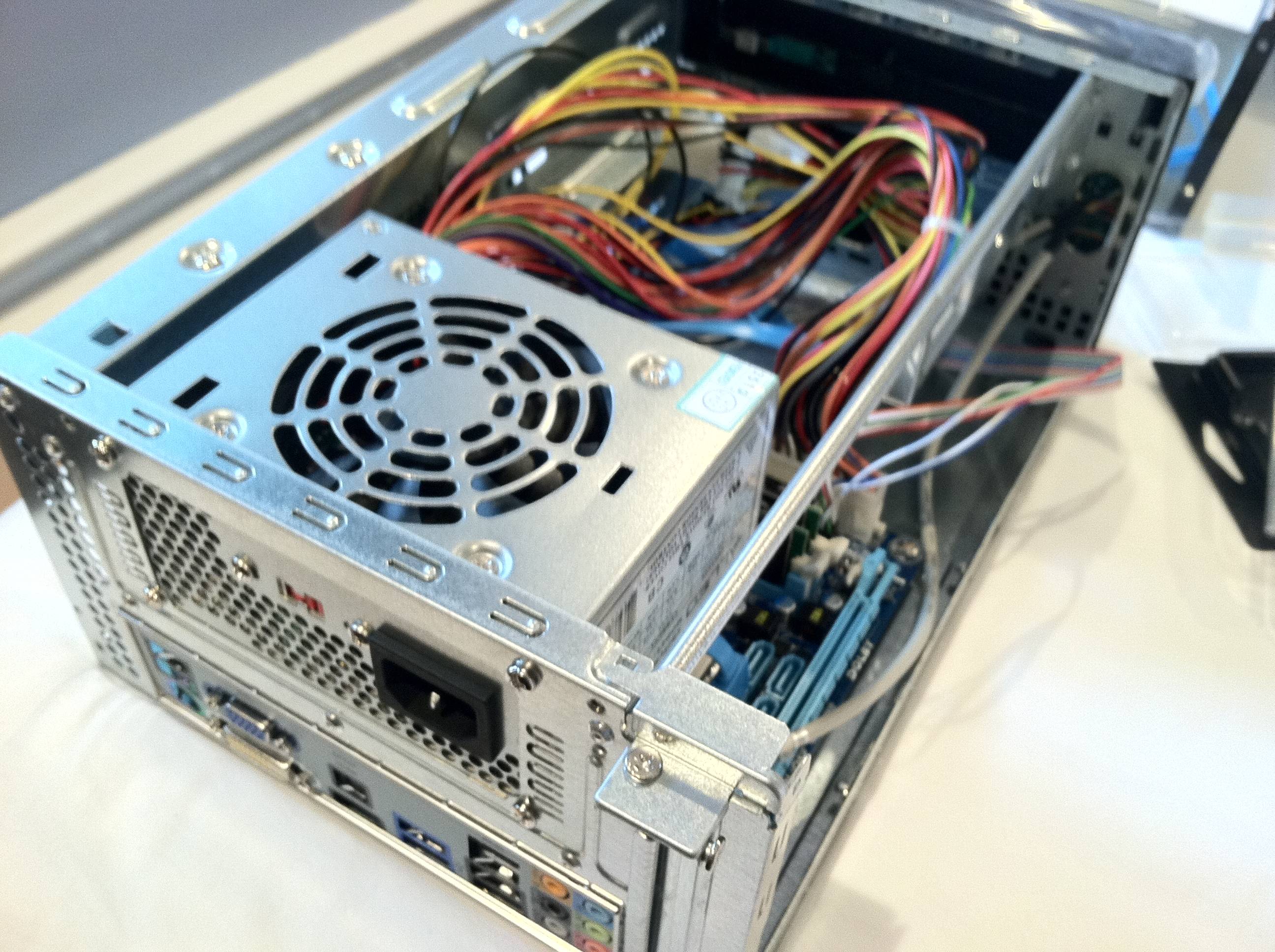 Close up the case and admire your work.? You just built an energy efficient machine that had a total cost ~$250-275 which gives room for an extra $100 for a monitor and keyboard/mouse setup.

Not only is this easy on the wallet at the time of purchase, this computer will also be a easy on the electric bill which is savings down the road.? We set this up with a Kill-a-Watt adapter and it gave a reading of only ~38W which is half the wattage of many light bulbs in residential homes. 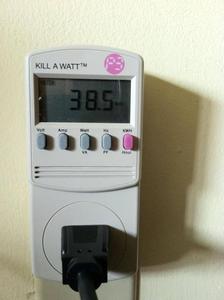 Immediately after the build, I installed a 64 bit edition of Windows 7 Professional (using a USB key).? It ran without hiccups using the full potential of the software, including Aero which is usually turned off on less powerful computers.? I was presently surprised to see how well it streamed 1080p videos, and how well the video quality was on a 32″ high definition TV using the full screen option on Netflix videos and having other applications open in the background.? These types of tests illustrated how adaptable the AMD E-350 chip can be in a multitasking situation.

The AMD E-350 chip operates very well for its price class.? I put it above an Intel Atom, with the performance level of an Intel Pentium 4 chip; just more economically friendly.? AMD has a perfect new line of chips here which should find it’s way into many more desktops and notebooks.? Apple recently announced a partnership to start using some of the AMD chips inside their new computers…and we all know how picky they can be.? Once again, these chips are perfect for better computational performance, as well as graphical- they beat out the Atom in battery life also while running some intense benchmark tests.

I highly recommend looking into this type of chip for anyone who wants a cheap and energy efficient family PC that will be left on all the time, or companies and small business owners who want the best bang for their buck that would be more than enough power for their entry level users.? While this may not be a screaming gaming rig, it absolutely is a solid choice for a day to day computer with the scalability and versatility to be made into a home theater PC, or a home server (instructions on how to build that here).