Posted by Hemal in Mobile Technology 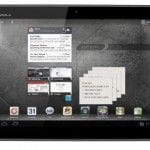 Motorola released the newest update to their tablet line with the new Xyboard (unofficially the Xoom 2).? With the recent underwhelming release of the newest iPad, it’s curious if this tablet could finally catch up and overcome the barriers that separate the Android vs. iOS tablet offering.

It has a large screen, comes with a great battery life, supports 4G LTE Internet speeds and looks gorgeous…ingredients for success, but is it enough to warrant my vote over the newest iPad?? Let’s find out:

Last April, we posted a review and comparison of the Motorola Xoom vs. the iPad 2.? At that time, I saw the Xoom to be a very viable choice over the iPad 2 for its future support of LTE technology.? I’ll keep my remarks similar in comparison to the iPad 3.

Hardware: The Motorola Xyboard is a beautiful slim tablet, supporting a size up to 10.1″ with a weight of 1.3-1.5 pounds, right around its competitors.? It has a 1.2 GhZ dual core processor with 1GB of RAM inside with the same internal storage options (16, 32, 64GB) as an Apple device, yet it does not support an additional SD card like Android phones or tablets.? The resolution size on both the 8.2 and 10.1″ screens are 1280×800 which is significantly less than the iPad 3, but for most applications and day to day browsing, the average Joe would be fine with either.

The Xyboard has both dual front and rear 5MP cameras that shoot 720p video which were impressive, but not industry leading and compared to photos I took with my iPhone 4S.? I’d say it was in between the iPad 3 and iPad 2 in comparison to a tablet offering.

The outside touch of the device is great.? The iPad has a sleek silver back panel, while the Motorola device has a dark black rubberized softer material which was very comfortable to hold, and perfect for the powerful speakers in the back.? Motorola was aiming to make this a media consuming device and did very well with sound quality and comfort for the viewer.

The Gorilla Glass on the front of the tablet is SPILL resistant which is great.? I normally do not test devices as a clumsy messy person, but tablets are meant to be used on the go and there are often times with weather can provide some unwanted moisture.? You can drop some water on the device and wipe it off without worry.? While I would not attempt to put this in a bucket of water and play Angry Birds, it’s more settling to know your device is durable.

Software:? Built on Android Honeycomb, it runs the latest and greatest offering until Android 4 is mainstream.? The stylus that is paired with the 10.1″ screen is useful for notes and drawings (we all do it) and is unique to some of the tablets that I’ve demoed.? I notice browsing is not as smooth as the iPad, but the responsiveness of apps or swipes are right on par, so it’s not a deal breaker.

4G LTE: Had to make this a category of its own because of how awesome it is.? Tablets need to have 4G today.? If you’re buying a new tablet and it does not have 4G, I urge you to reconsider.? While some may get by on a WiFi only tablet, I believe that the Family Share Data Plan is right around the corner, so it’s a tough sell to pass up those features.

Overall, I do like the Xyboard enough to say it’s the best Android tablet around and it should be for quite some time.? There are very little features that competitors could introduce in the short term that would shy me away from purchasing this device, but the price is what deters me away from dubbing it an iPad killer.? The iPad 3 is a little cheaper than the Xyboard, and still has the support of a better app store, more support and features from 3rd party venders and its resolution for browsing the web or watching videos, keeps it a notch above.

Go to your local Verizon Wireless store to check this guy out, it’s fun to play with and it might be the change you’re looking for!